Escape from the everyday..
Caldera Massages Studio
at the Oia Sunset

Experience a total balance of body, mind & spirit with a Santorini massage on our exclusive terrace or in our unique cave style rooms …

Deposit Refund for cancellation received 7 days or more prior to the appointment
No Show, Cancelling for any reason within 7 days forfeits the Deposit.

Our massages are available outdoor or indoor, according your preference and the weather conditions (best in the mornings) 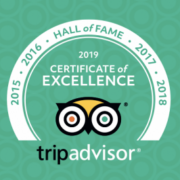 Caldera Massages Studio, atop the Oia cliffs overlooking the sea, was created in 2006 as a perfect antidote to the stresses and strains of today’s hectic lifestyle. A sine qua non for massage connoisseurs wanting to complement their Santorini holiday’s relaxation with a professional massage in Santorini. 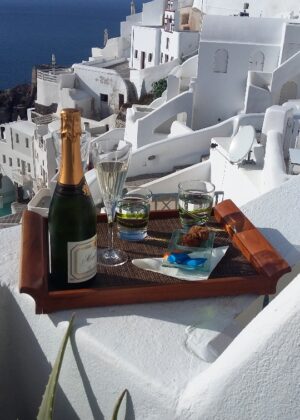 highly trained and experienced staff, personalized care, a combination of ancestral and modern knowledge of the human body - all to achieve the best massage. The Studio's Massage Therapists provide deep tissue, relaxing or invigorating massages - based on your request. Our professional Massage Team aims to provide a quality and unforgettable Santorini experience. 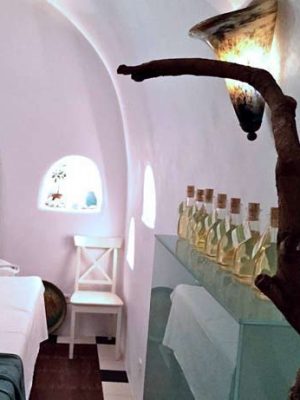 Careful planning and total attention to detail have created a Zen-inspired environment which combines the mystery & charm of a Caldera cave house and Terrace, overlooking the famous Oia sunset, with the ultimate in attentive service. It truly is the perfect place to relax and unwind. 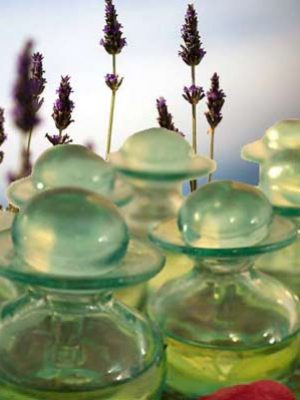 Enjoy your massage in Santorini and then view the famous Oia Sunset from our sea-view Terrace. Select to have your massages Prior to or After the Sunset.  Located in the well known Kastro – Castle area, the gathering point for the Oia Sunset. Two Terraces facing directly to the Sea and the Santorini Sunset. Book early as we limit the number of couples sharing the Terraces for the sunset viewing each evening with drinks.

Our unique Oia cave house atop the cliffs includes special Couples Rooms. All  treatment rooms have adjoining private shower-changing rooms & WC.  Our massages are available outdoor or indoor, according your preference and the weather conditions.

Our face treatments combine the power of carefully chosen essential oils with the healing and purifying properties of different clays.  Plus the natural products of CALΔERA cosmetics line to meet your personal skin requirements.

In April 2008 Caldera Massages Studio launched its own cosmetic line -CALΔERA – result of  two years effort and research in Aromatherapy. The line’s name is inspired by the beauty of the volcanic caldera of Santorini and the charms of the Mediterranean village of Oia.
Composed of natural and Aromachology products – the formulas contain base materials of high bio quality and exclude synthetic fragrances or Parabens. Animal products, such as lanoline and petrochemical derivatives, are avoided to diminish allergy risks.

The fragrances and properties of the CALΔERA  products are due to the 100% natural essential oils and other natural ingredients.

Caldera Massages Studio at the tip of Oia Santorini

Location:  Within the Pedestrian Only Zone of Oia. Oia is without street addresses and landmarks are used. Please ask anyone for directions to the Kastro Restaurant – we are just next to it with our green Terrace.  We are located to the right-hand side of the restaurant as one looks down onto the restaurant from the village path. The Byzantine Oia Castle Ruins is another landmark in our general area.

Walk: Within easy walking distance of all Oia hotels – average 10 minutes walk. Please ask your Hotel Reception or anyone in the village for directions to the Kastro Restaurant – we are just next to it. 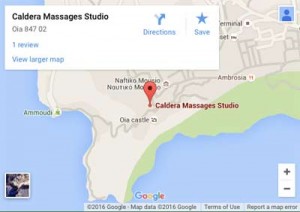 Our massages are available outdoor or indoor, according your preference and the weather conditions

**Full Refund for cancellations received 7 days or more prior to the appointment
or guests may request Full Credit to a future date.
No Show, Cancelling for any reason within 7 days forfeits the Deposit.

May be purchased for any Couples Package or individual Treatment or a Gift Voucher for Cosmetics. Pay Secure Online by Card. Perfect for a Santorini honeymoon, Santorini wedding gift, birthday or special memory.

Please email to let us know your requirement.

Who is behind Caldera Massages Studio’s Concept ? 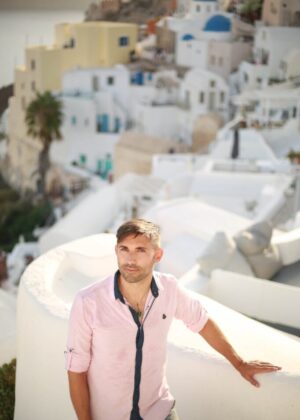 Hi my name is Antonio Totev

I am French with Bulgarian origins, living in Greece. I studied Physiotherapy in the Medical University of Varna, Bulgaria and Chinese acupuncture and energetics in IEATC ( Institut d’Energétique et Acupuncture Traditionnelles Chinoises), Paris, France. I also followed many other courses and lessons in Europe.

In 2004, I arrived in Santorini and started working slowly on the idea of a massage Studio…”studio” from Latin studere = to learn, as learning & improving is at the base of Caldera Massages Studio, officially opened in 2006.

I am thankful to have had the chance to cross paths with amazing teachers who inspired me and taught me the skills I am transmitting now to my team.

Here I will mention three who really had a strong influence on me,
but there are many others.

CMS’s concept is to provide a whole product to our customers,  the optimal protocol of a treatment adapted to the individual’s needs but also to create an experience in a humble, yet unique environment and ambiance.